“Star of the Nativity” 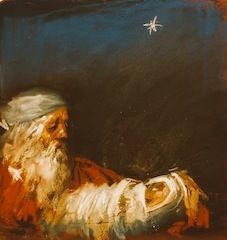 Previous
Next
In the cold season, in a locality accustomed to heat more than
to cold, to horizontality more than to a mountain,
a child was born in a cave in order to save the world;
it blew as only in deserts in winter it blows, athwart.

To Him, all things seemed enormous: His mother’s breast, the steam
out of the ox’s nostrils, Caspar, Balthazar, Melchior—the team
of Magi, their presents heaped by the door, ajar.
He was but a dot, and a dot was the star.

Keenly, without blinking, through pallid, stray
clouds, upon the child in the manger, from far away—
from the depth of the universe, from its opposite end—the star
was looking into the cave. And that was the Father’s stare.
Next
Previous